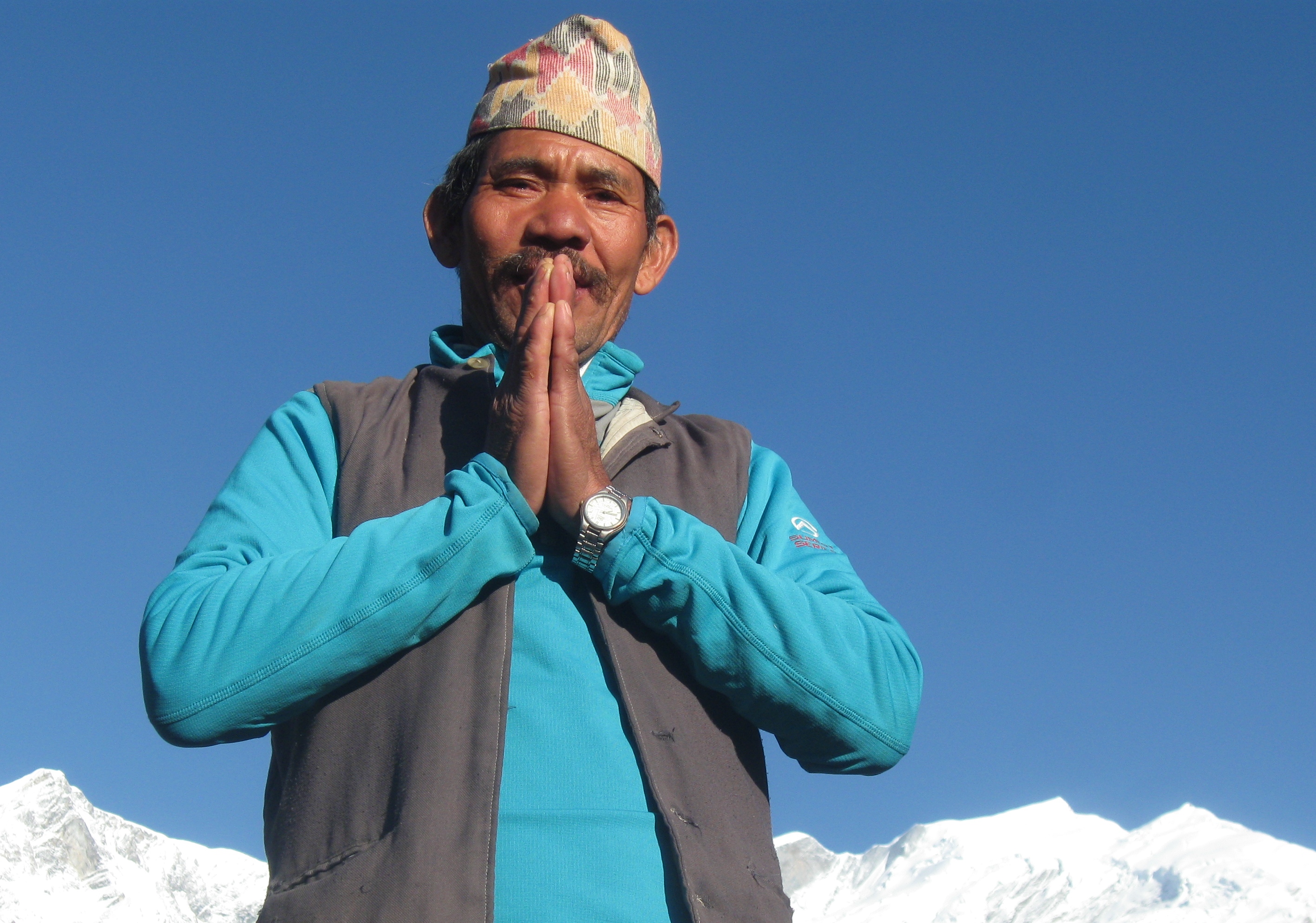 Imán is who I consider one of my masters – one of the best if I may say. I’ve never asked him to teach me about anything, and he has never thought that he has anything to teach me, but the funny part is that he is always sharing his wisdom with me.

He teaches me new things every day – without even knowing he does, and sometimes it is very hard for me to apply those lessons personally or with my immediate surroundings. Without even knowing, he keeps teaching me without giving up, and he does it with such a good mood and dedication that applies to everything he does.

The subjects that we normally cover during “class” are countless; so many that sometimes I am unaware of what they are. To mention a few that I’m at least fully aware, I can start with four great strengths that I’ve seen in him: compassion, to serve others, humbleness, and good mood.

My master is from the Tamang ethnic group and he lives in a province called Kabre, located at the foothills of the great Himalayas. He grew up next to rice fields and surrounded by waterfalls. He is older enough to be my father, he was born almost 60 years ago between the mudflows following heavy monsoon rainfall and the flowers that blossom during Nepal’s spring season.

I learn mostly -through indirect experiences – and most of the time I basically  just observe, and feel. During our walk through the mountains I´m just an attentive witness. His determined actions are a source of deep wisdom, and his daily routine shows vividly and fill with meanings words such as: leadership, simplicity, perseverance, motivation, honesty.

His constant effort at work, those thin muscles that bears the heavyweight he carries, his deep gaze and broad smile with sweat running down his face, all his attitudes combined gives a whole new meaning to that phrase: ”work dignifies man», and that man surely dignifies his work.

Imán works as a porter. He’s one of the people I admire and respect the most, and I think he doesn’t even know it. He gets up really early, before anyone else does, he thoroughly cleans himself with cold water brought from our beloved Himalayas. He prepared himself while making sure that everyone else is doing fine and getting ready.

He’s the oldest and he still is the strongest of all. His people follow him wherever he may go. He has no qualms about accumulating more work, if this is something that it makes possible for the rest to cope with the hard day to come. He doesn’t see himself different from the rest, in fact, I would say, that the only thing that might be different is his clothing, which is much simpler and worn out that those from the younger members of the group.

He never goes hungry, but he serves and fill the dishes to the rest before he serve himself. Imán is not just a leader; he is just another one of them.

Not only is he the oldest and the one who carries the most, but he is also the one who arrives first to our destination  and doesn’t rest until the last one arrives safe. He earns just the same amount of money as the rest of porters for a day of work. Doing my job, for a day of work, I earn more than he does doing his for 17 days contracts.

After leaving his cargo, he cleans himself up again, changes his sweaty shirt and returns with a flashing smile – 17 times larger than mine-, he sings, claps, takes another sip of tea, he makes sure that I have one too, then he makes a joke or dances.

He enjoys the evening by the fire that warms us all. He enjoys all of his journeys, no matter how steep the path is, and he goes along with that same flashing smile for all those who ride along with him that day. It is on his nature to serve and help others, expecting nothing in return and not having any other obligations but to carry the load.

In front of everyone I try to practice my Nepalese with him:  Hey! Imán! Tapailay kiti manparcha? (Do you like girls?)

He tries to hold a smile, knowing what’s coming, and tries to stay put. He shakes his head to say NO as he clenches his lips and keep insisting No, showing us how conservative he is. Then, again I try to insist on a higher tone as if I maybe had not clearly understood his gestures: kiti manparcha…? – He’s not capable to say in public that he does like girls, so he normally answers with a big NO- …While my fellow Nepalese mates are waiting, under their watchful eyes, for me to say what they know I’m about to.

Then I ask him, looking at everyone: so, if you don’t like girls, then… Tapailay keta manparcha! (You like boys!!)

All my Nepalese mates burst in laughter and he lifts his finger way up doing a -No- sign, moving it strongly to say a big NO! After a few seconds he also bursts into laughter, not being able to contain himself.

The most curious customers of our expedition don’t know what we were talking about, but they realized that we were having fun talking nonsense and start laughing as well.

When the day is almost over, Imán approaches me as usual, gets as serious as he can get. He stares at me with a deep look and repeats to me with appreciation – with a certain melancholy on his face – that he is over 60 years old. I listen to him carefully and he continues to tell me that he has been a carrier basically since he was born.  He tells me that to keep his children from being porters, it is up to him to keep being one for as long as he can.

He insists on showing me how lucky I am, and he wants me to be conscious about that, and be aware of everything that I have right now in my very own hands. He makes me realize all the strengths and privileges I have and invites me to explore how can I use those privileges to help myself and to serve others.

Imán wants me to make the most of the freedom and the advantage to be able to choose my own steep path, and also being able to choose a wide range of possibilities. He encourages me – with a gentle look on his face- to seize the opportunity that I have to follow this “Journey” called life with more advantages than the rest.

I remained silent, and looked at his hesitant face changing between joy and sadness. I gave him a warm pat on the shoulder, and I looked at him one last time, with a pursed smile, and end up closing the evening by saying:

Without haste, I bid farewell to all those present, porters and customers, I was the first one to go, after another «class» full of learning in the very heart of the Nepal Himalayas.